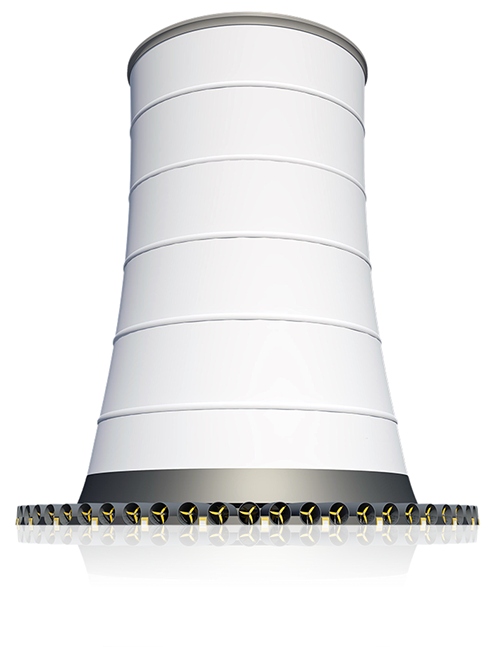 The Solar Wind Downdraft Tower is the first hybrid solar-wind renewable energy technology in the market. The patented structure is comprised of a tall hollow cylinder with a water injection system near the top and wind tunnels containing turbines near the bottom.

To start, a series of pumps deliver water to the Tower’s injection system at the top where a fine mist is cast across the entire opening. The water introduced by the injection system then evaporates and is absorbed by hot dry air which has been heated by the solar rays of the sun.  As a result, the air becomes cooler, denser and heavier than the outside warmer air, and falls through the cylinder at speeds up to and in excess of 50 mph. This air is then diverted into wind tunnels surrounding the base of the Tower where turbines inside the tunnels power generators to produce electricity.

In geographic areas where atmospheric conditions are conducive, the exterior of the Tower may be constructed with vertical “wind vanes” that capture the prevailing wind and channel it to produce supplemental electrical power. This dual renewable energy resource greatly enhances its clean energy-producing capability and productivity.

Solar Wind Energy’s Tower is unique in that it does not have any operational limitations in terms of time. It’s capable of operating around the clock, 24 hours per day, and seven days per week. Whereas there are operational limitations with solar collectors that work only when the sun shines, and with wind turbines that work only when the wind blows.

It also has the ability to be operated with virtually no carbon footprint, fuel consumption, or waste production. It generates clean, cost effective and efficient electrical power without damaging effects.

To complement its renewable energy technology and aid in its expansion efforts, Solar Wind Energy  developed a proprietary software based analytical program to determine the energy generation capabilities of its Towers based on the climate in geographic locations around the world, and has taken the appropriate steps to protect its intellectual property invention. This essential tool applies “known” scientific meteorology data of a specific area to the Tower’s variables in order to determine and project energy outputs on a daily basis. Advancements in the scientific community over the last decade make it possible to predict and pin-point specific weather conditions and have provided significant insights into the tool’s development process and direction.

Solar Wind Energy’s analytical tool, combined with its proprietary technology and existing core patents, provide it with a unique opportunity to plan and target the global positioning of its Towers to help meet the world’s energy needs. Solar Wind Energy can now rapidly respond to a request from virtually any country reasonably suitable to host a project and determine specifically where the Tower should be located, the size of it and the amount of electricity it can produce.

Through consistent innovation, the Company has successfully managed to economize the Tower, reducing capital costs while enhancing projected financial performance. This development was made possible by utilizing its Global Energy Generation Calculator software which can calculate and predict energy production of the Towers given a projected location and incorporating that locations’ local weather data. By feeding weather data of its future site location into the program, the Tower’s height and diameter can be adjusted along with the amount of water required as fuel to create a desired amount of energy. The outcome dictates the optimum size of each Tower.

Under the most recent design specifications, the Tower designed for a site near San Luis, Arizona, has a gross production capacity on an hourly basis, of up to 1,250 megawatt hours. Due to lower capacities during winter days, the average hourly output per day for sale to the grid for the entire year averages approximately 435 megawatt hours/hr.

Each Tower will be constructed on location using conventional materials, equipment and techniques, associated industries, as well as local workers in the surrounding town or city. Each location will benefit significantly from the creation of professional manufacturing, construction and transportation jobs, in addition to having a high efficiency energy resource close by – providing clean renewable energy at a cost more favorable than nuclear plants with no negative impacts to the environment. 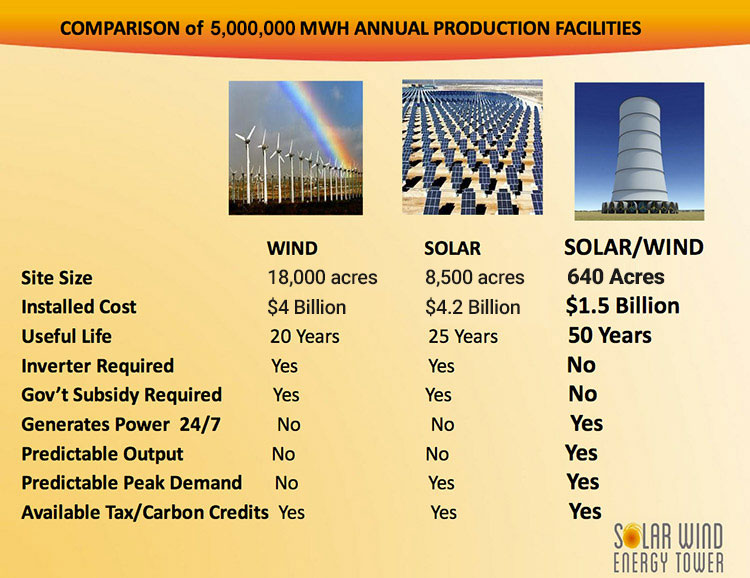 This patent covers a novel hydraulic system capable of maintaining high efficiency hydraulic to electric conversion under a wide variance of wind speeds, as coupled to a plurality of wind turbines in wind tunnels.

This patent claims are targeted to represent the advantages of the new Tower structural shape, the configuration of the Tower walls, their composition as well as the wall thicknesses for a given height, along with more efficient construction methodology and enhanced wind force resistance over prior Tower designs.

The demonstration to the left depicts the Tower in operation. The color of the arrows represent the current internal temperature of the air which transitions from hot near the top of the Tower to cold as the air rapidly races towards its base. Please feel free to leave a comment or question on the Company’s YouTube channel after you watch this demonstration.